I started watching Bones when I had to have a spinal tap before my second scoliosis surgery. I spent my Thanksgiving break laying completely flat on a couch and binge-watching Bones DVDs that my dad picked up for me from Blockbuster’s (which definitely dates my story). I focused on it instead of the raging pain in my brain every time I moved.

Since then, I continue to watch Bones reruns when I am tired, in pain, not feeling well, or just need something comforting on in the background. I love the ridiculous relationships, elaborate jargon, and dumb jokes.

In one of the episodes from Season 4: The Perfect Pieces in the Purple Pond, the team solves the murder of a man with OCD. I first watched it long before I got my official OCD diagnosis. Back then the signs were all there, but I was high-functioning and kept many of my rituals and repetitive behaviors hidden. 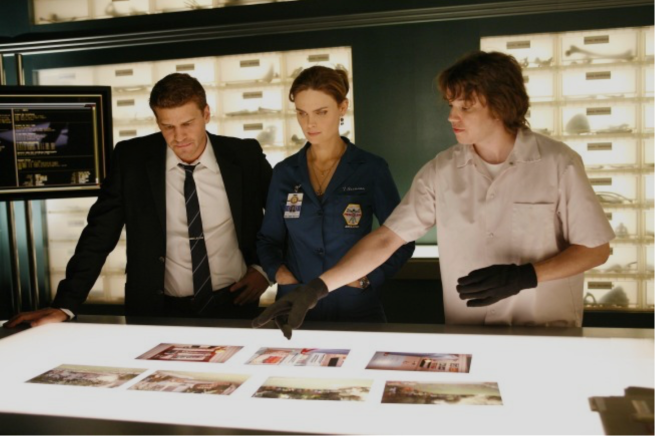 So later, when I watched it after getting my diagnosis and learning more about how to be someone with OCD, I was curious. Would OCD be code for germophobic or would it mean something more?

I think they tried to make it something more. The character definitely had germophobia, which was an important part of their investigation. They discovered that the man had been able to “cure” his OCD through an extreme exposure therapy program that required him to get muddy and eat a mint that was dipped in a toilet bowl. I’m glad that they gave him the possibility of addressing his OCD and having a fuller life (he fell in love and was able to publish his books again) but I wish they hadn’t talked about “curing” OCD like it was the flu or a cold.

OCD is lifelong and ebbs and flows. Some days, weeks, months, and years it is easier to manage than others. But like my titanium spine, I will have OCD for life, even with medication, therapy, and my own version of exposure therapy (namely traveling a lot, using various restrooms—using the term generously–and experiencing bouts of traveler’s diarrhea among other things). I will never be “cured.” And that’s okay. I’m okay with that but I work at it.

I will also never voluntarily eat a mint from a toilet, and I’m very okay with that. I don’t think I need to do that to be healthy!

I also didn’t wait to fall in love until after I got help, nor did falling in love fix me. However, my partner did help me realize that I needed help when I was in a very bad place. People with mental illness can fall in love and be in a relationship.

Despite the heavy focus on germophobia, I actually thought they portrayed ruminations and their connections with rituals realistically in the person of a suspect with OCD. A man from the treatment program confesses to the murder because he did not follow a ritual that he performs to prevent the death of the person next to him. In this case, he didn’t perform the ritual, and the man he was with at the time soon died. He believes that he is the cause of death, as a result.

It might sound ridiculous but I definitely have worried that if I don’t wish my loved ones a loving goodbye whenever they leave or I hang up the phone that something will happen to them. I worry that I’ll jinx them. Some days I can worry about this for minutes, even hours. I might worry until they get home safe. Other times, I can briefly think about it and then move on without an elaborate goodbye. But this habit is hard to break.

If you haven’t watched this episode or plan to watch it and don’t want to know who the killer is, please don’t read any further!

Honestly, the end made me really sad. After watching plenty of Criminal Minds episodes in which the insane killer has OCD among other mental illnesses, I was really bummed that the killer was a mom with OCD who killed her son in a psychotic break. I wish that the writers had picked a different version that didn’t involve someone with a mental illness (that is very very very rarely violent despite violent ruminations—and often because of these!) killing their son because of their mental illness. It seemed just too easy and lazy. I was hoping for more.