There’s so much advice online about talking to oneself as a friend. You’re supposed to stop the negative self-talk that’s just making you more anxious and depressed. One of the number one pieces of advice on the internet is to treat yourself with kindness. You write out positive affirmations and say them into the mirror. Or you repeat mantras. 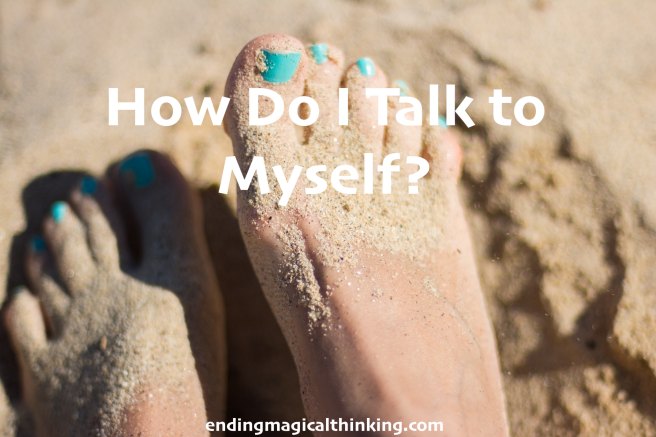 I understand the purposeful self-talk, but not the so-called natural negative self-talk. It’s not that I’m free of negativity or feeling frustrated and down on myself, but I don’t have a script that says “I am a failure” so clearly. My script is so much more insidious and difficult to identify.

My brain constantly tells me what I should do until it doesn’t know what I should do and then I get paralyzed by indecision. I wonder what to do and what’s the best thing to do—I don’t weigh pros and cons adequately. My brain weighs possible negative options or outcomes so much higher than they’re worth.

And when I do decide, I often second guess my decision. I don’t always trust my brain (and by extension myself) to make the right decision. So I worry about what I did. I wish I could trust to a sense of intuition, but I feel like I often just don’t have such a sense.

And the need to justify everything I do: this one is huge for me! If I take a break, a nap, or spend money on something I need to explain that it was okay to anyone and everyone. I’m not talking about justifying an expense to my husband or anything like that. No, I’ll try to explain to people at the cupcake place that I’m going to share the cupcakes with others at a party. That way they don’t think I’m just buying cupcakes for myself. Which is wrong, because? I feel guilty like I don’t deserve it, so I need to make up an excuse to anyone.

This feels ridiculous and I know it’s ridiculous…. except I can’t help instinctively thinking to do this. Sometimes I can stop myself, but nowhere near how much I would like. This is what I imagine that my negative self-talk is—the feeling of guilt when I buy cupcakes or get a pedicure. I can’t just enjoy it. I have to feel that I have an ironclad justification for doing it.

Sometimes if I do something like a pedicure, I sit there in the chair numbering all my reasons for why I need one and it’s not a silly waste of time and money:

Nowhere on this list is a call to stop making a list, but that’s what I imagine people are talking about when they say change the negative script and start speaking kindly to yourself. I wouldn’t want a friend to feel guilty for getting the occasional pedicure. I wouldn’t judge them for it. I wouldn’t say “Hey, that’s silly and reckless and self-indulgent and you don’t deserve to do it.” Nope. That would be a crazy mean thing to say. I don’t actually say this to myself, but I feel overwhelming guilt that if I did put into words, I imagine would sound like this.

I don’t know how to change this script. Sometimes it’s so deep-seated and wordless that it’s just a gnawing ache in my stomach or the start of a migraine. I try to purposefully tell myself that it’s okay and if on the off chance someone was judging me, that’s their problem. And anyway, it’s unlikely they are. I’m probably way harder on myself than anyone would be and that needs to stop. It’s not healthy or okay to feel terribly lazy for a nap when I’m worn out. I don’t need to have a list of reasons why I can give myself permission to take a nap. I’m not six years old. I can make this decision without a forum.

So I’m going to try to question these feelings, vague apprehensions, and terrible need to justify myself and my actions. I’ll see how it goes and write more once I give it a shot!

Photo by Juja Han on Unsplash