I was talking to a new doctor the other day: explaining my surgical history. You see, I’ve had the same surgery twice. I first had reconstructive surgery when I was thirteen years old. My spine was an S-curve: both curves around 85-90 degrees. My right lung was collapsing and my heart was being squeezed. I had to have surgery to stay alive. I was and still am grateful to my surgeon. 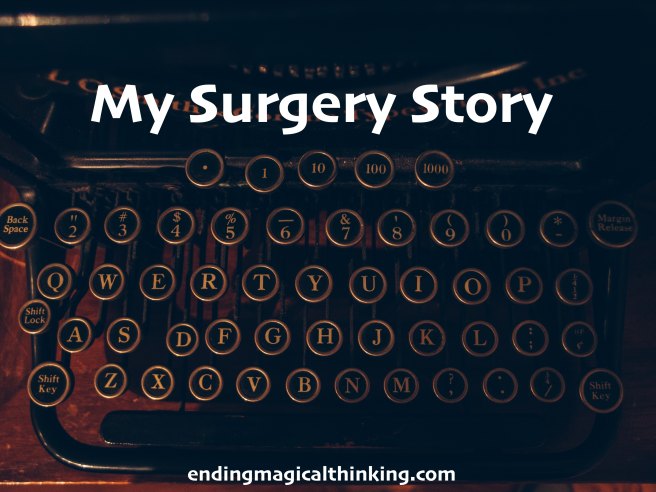 However, after a few years my hips were degrading and I was having trouble standing. I had to go see a doctor. I couldn’t see my first doctor, because, being elderly at the time he did my surgery, he had died. I saw a new doctor, who let me know that the hardware used to correct my spine—the rods, in particular—were old fashioned and had to be replaced with better hardware that would put less strain on my body.

My mom cried and I went to comfort her. She blamed herself for somehow picking the wrong surgeon the first time around and making it so I had to have surgery again.

However, I don’t blame her or even the first surgeon. Would it have been nice not to have surgery twice? Of course! But I really believe my first surgeon was doing his best and saved my life.

My second surgeon made my life better. And luckily my family was able to use a bit of health insurance and a lot of loans (which included my college loans) to pay for both.

When I told my first college roommate this story, she asked me if I had sued the first doctor. Not until that moment had I thought about it.

Last week, my new doctor asked a similar question, wondering why my doctor had not been more up to date. I don’t know why he was not. I wish he had been, but I think he did the best he could.

I try not to think about it too much. I don’t know if I should be mad or upset. I’ve never really gotten mad or upset about it. At the time I was too busy preparing to apply to college in time to have surgery in the middle of my senior year of high school.

So I explain that I had surgery twice. I got new hardware. They cut out my old scar and I eventually got a new scar after the incision healed. I have more areas with deactivated nerves and reduced sensation. My muscles are all out of whack, when they even function. I’m not sure how much to blame all that on having two rather than one surgeries. I’m not sure that I care to even try.

Instead, I worry about and hope to never have surgery again, or at least not soon. I hope that it is a good sign that it’s been over ten years since my last surgery. I focus on improving my physical health as much as I can, or at least keep it from getting worse.

And I hope that medicine continues to improve in case I need more surgery down the road. And I try to repress that fear as much as I can so that it doesn’t aggravate my anxiety.

So much didn’t change after I had surgery the second time. I still can’t bend my back. I struggle to bend at the waist. I can’t twist. I have stiff muscles. My hips are inflexible. But my body is still holding up. I don’t think things have gotten much worse, so I can’t really ask for more.

But I always tell doctors and health practitioners that I had two surgeries, even though it probably doesn’t medically matter much, because that second surgery is part of my life. I earned that experience. It’s shaped my body as well as who I am. It is part of my biography and although I don’t get angry or feel especially frustrated by it, I am not going to erase that experience from my story.

I learned a great deal from that second surgery. It significantly shaped my senior year of high school and my first year of college. I learned about myself as well as those in my life.

My friends came to visit me in the hospital for Christmas. My mom spent almost every day at the Smoothie King to get me something I could eat on opiates, and one of my favorite teachers marked me present every day I was out.

I felt loved and supported in a way that most people only get to experience later in life. And at the risk of sounding really cheesy, I think that was a good thing. It’s something to run through my mind when I get depressed or anxious about the world. I feel the way I do when I hear a really great song or hear a moving line of dialog.

Photo by Andrew Seaman on Unsplash