I’ve been procrastinating writing this for a while. I finished my comprehensive exams and then orally defended them this past Friday. And not only was I exhausted, but my anxiety was at a peak as long with everything that came with it. 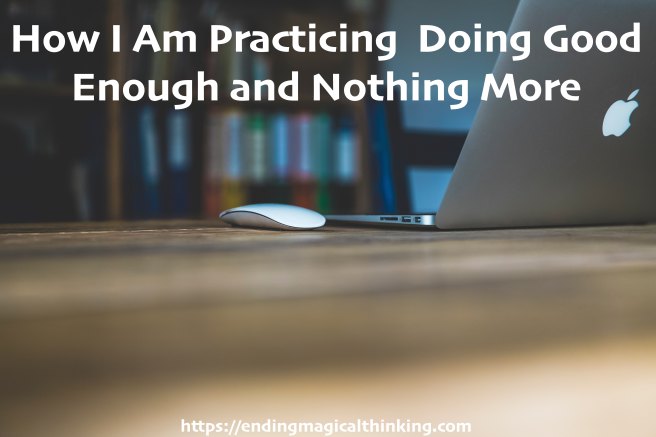 I wrote six essays around fifteen double spaced pages each. Only one shorter than fifteen pages, but most a few over. The total was around ninety-five pages.

It was basically a thesis in six parts. I had ten days.

I woke up on Monday morning, read the questions, and then rolled back over and took a nap because I didn’t sleep well the night before.

A few hours later I woke up and started on my first question. I wrote for a few hours on anthropology and morals, and then took a break to eat, and then repeat several times a day for the next four days.

By Friday, my muscles were so tense that I could barely move. I was so sore that I couldn’t sleep, which I was already struggling with.

After talking to my therapist (one of the only breaks I took—done via phone) she convinced me that even though I had just gone to the chiropractor a week ago. She has struggled with her own chronic conditions and told me that she has had exceptional weeks where she had to get massages several times in one week.

I couldn’t fathom that. I still can’t accept that some months and years I might not need to see a massage therapist or chiropractor for weeks, but some periods of my life, I might need to go more frequently.

I made the appointment for that afternoon and immediately felt a little bit better. After leaving I felt renewed and able to get going again.

The relief lasted a few more days. At the same time, I had to take Ativan to sleep and to focus. I was too jumped up on adrenaline and too tense to do otherwise.

I had to take more breaks than I intended to do before I started.

I struggled in particular with my last essay, maybe because of the topic. Maybe because it was the last one I did. I gave it more time than the others, and still struggled to finish it, but I did.

I finished it—hit all the points the question asked for and the page limit. I wasn’t thrilled, but I was okay with it and I gave myself permission to turn it in with all the other essays.

This was my first real and significant high stakes chance to practice doing good enough and being okay with good enough.

I knew that essay wasn’t amazing. It wasn’t the best, but it was midnight and I was exhausted. I was not going to push myself past my reasonable limits like I would have in the past. I was tempted, but I didn’t want to do that to myself.

I’m finally starting to feel stronger and better, and I didn’t want to jeopardize that more than I already did through this piece of my program.

I turned in my essays and immediately got an email from one of my advisors asking for additions to my essays that were unnecessary and not required earlier on. It would have taken several hours. I wrote back that I couldn’t do it, and never heard back.

I would ordinarily do it, while panicking that I hadn’t finished it yet.

Then if I hadn’t done it, I would have panicked at not receiving an email response. I would have freaked out that I would fail or that I was letting down my advisors.

But I did it, with help from Ativan, and went to bed and eventually fell asleep.

I was even prouder in some ways of this accomplishment than the actual exams.

And after a week, I met with my three advisors to orally defend my essays.

I took more Ativan and tried to talk to myself about being okay with this. I followed the suggestion of my colleague and tried to think of it as a conversation with advanced scholars.

I brought my favorite tea and my computer with all my essays.

I sat down with everyone and immediately had to field antagonistic questions and questions that went beyond the scope of my essays and research. I did my best, always gave some answer, and defended my positions.

I had to defend and expand on my weakest essay, which my advisors recognized as my weakest.

Finally, I left the room for them to decide, worried that I would have to rewrite at least two of my essays, at the least. I was prepared for revisions or additions, but this was more than I thought.

However, when I returned, they shook my hand and let me know, “Congratulations. You passed.”

Simple, short. I didn’t argue but thanked them and we moved on to talking about my last requirement, to be done over the summer and defended in September.

I had been having trouble sleeping and was grinding my jaw.

But after leaving the defense, I felt immediately exhausted. Just tired. By the time I got home from the celebratory dinner with my partner, I could barely move. I just wanted to go to bed, hours earlier than I had been in the last few weeks.

The last few days I made up for all the lost sleep, putting off writing this. I’m still recovering.

And I’m okay with this. I wish this wasn’t as late, but this is also practice in accepting my limits and prioritizing my health.

It’s my first step in working toward the new part of my life that will include self-care and not denying my health. And I’m pretty happy with it, even if it wasn’t the most stunning academic performance of my graduate studies.

Photo by Markus Spiske on Unsplash